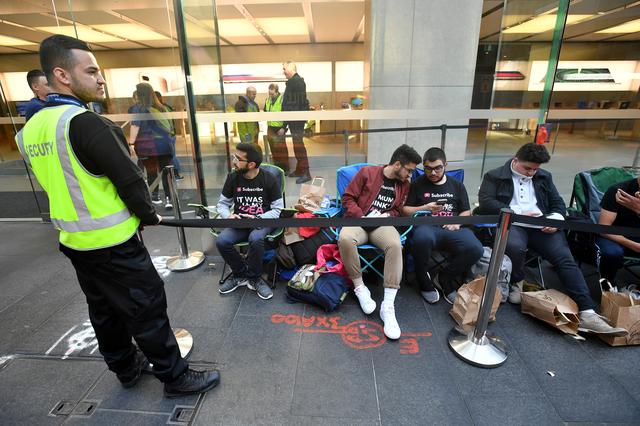 SYDNEY (Reuters) –
Apple Inc’s (AAPL.O) iPhone 8 launch in Sydney, one of the first cities to access the product in Australia, saw a bleak turnout as
fans held out for the soon-to-be-released premium iPhone X.
Hundreds of people
usually gather at Apple’s Sydney city store with queues winding down the town’s main street, George Street, when there is a new product release. On
Friday, there were fewer than 30 people lining up
before the store opened, according to a Reuters
witness.
Mazen Kourouche, the first in queue after lining up 11 days outside the store so
that he could buy and review the product on YouTube, said there were modest refinements.
Click below banner for quick download

Download now (quick server)
“(It) is pretty similar to the iPhone 7 but it shoots 4k 60 frames per second and it’s got a new glass back instead of the metal which is apparently more durable, he told Reuters. There aren’t too many new features to this one.”
Poor reviews of the iPhone 8, which comes 10 years after Apple released the first version of the revolutionary phone,
drove down shares of the company to near two-month lows of $152.75 on Thursday, as investors worried pre-orders for the device had come in well below previous
launches.
The iPhone 8 will only cater to those who want a new version but do not want to pay a hefty $999 for the iPhone X, said iTWire.com’s technology editor Alex Zaharov-Reutt, who did not line up for the launch.
“Yes there is a new iPhone coming in a couple of months and plenty of people would want
that,” he said.
The iPhone X is a glass and stainless steel device with an edge-to-edge display that Chief Executive Tim Cook has
called “the biggest leap forward since the original iPhone”.
Reporting by Paulina Duran, Jill Gralow and James Redmayne in SYDNEY; Editing by HimaniSarkar